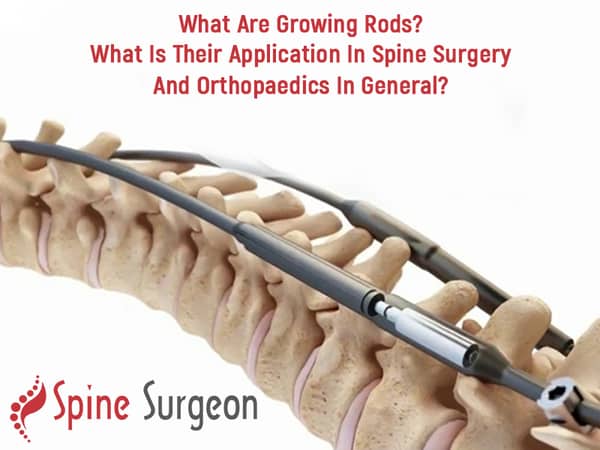 What are growing rods? What is their application in spine surgery and orthopaedics in general?

How modern technology transformed disease management? We are going to discuss a new dimension in surgical interventions. Do you know about growing rods? Here is the information provided by Dr Suryapraksh Voleti.

Treatment for early-onset spinal malformations became challenging to surgeons. The spinal conditions are rapidly progressive and not responsive to conventional treatment, requiring surgical treatment at an early age. Nonsurgical treatment methods like casting and bracing might hinder the development of the chest wall leading to cardiopulmonary dysfunction. Spinal fusion is available, but it is not ideal for children with scoliosis.

In such conditions, growth rods have evolved as the most popular and the most heatedly discussed techniques for spinal deformities. Not only in spinal deformities, but traditional growing rods have also become a standard technique for growing children with other orthopaedic conditions associated with legs, elbow, ankle, etc. The techniques used for lengthening of the limbs are called internal lengthening nails (magnetically controlled).

What Are Growing Rods?
Early-onset scoliosis means it appears in children below ten years, due to various conditions like congenital vertebral abnormalities, neuromuscular diseases, or idiopathic causes. In severe cases, the curves interfere with the growth of other body parts and significantly reduces life expectancy. Conservative (nonsurgical) treatment is used first. To manage this fusion, less surgery is the only way until the child is older enough for final fusion surgery.

Implantation of growing rods is the standard surgical technique that helps to delay final fusion. It was first described in the mid-1980s by Dr Moe and his colleagues. 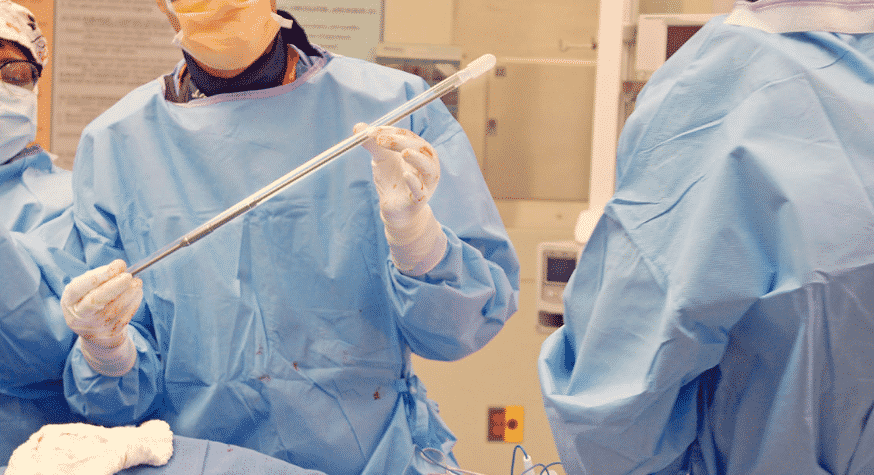 Growing rods and their variants used in general ortho surgery(overview)
Not only in spinal surgery, but growth rods have their importance in the treatment of other body parts as well. Lack of skeletal maturity in the bones of different body parts might result in improper alignment. Congenital abnormalities, fractures, or other developmental deformities can trigger the limbs to grow out of alignment. General fusion rods implanted can hinder growth which affects the quality of life and causes cosmetic deformities in growing children. But growing rods can promote growth and correct deformity as well. These growth rods are mostly used to correct the deformed limbs of children.

Types Of Growing Rods And Their Application In Spine Surgery
As we discussed above, growth is used in children exclusively of age between 2-10 years. Growing rods are of different types which include the traditional growing rod, a Vertical Expandable Prosthetic Titanium Rib (VEPTR), and a MAGnetic Expansion Control (MAGEC) rod, etc. are popular. The type of growing rod to be used depends on several factors such as curve type, age, and the other underlying health conditions that contribute to scoliosis.

Not only the spine, but growth rods also allow the lungs to grow to the full capacity as well. Generally, these growth rods are placed under general anaesthesia. The stability and effectiveness of the technology used in spine surgeries today, patients are able to walk the day after spine surgery, and the hospital stay might be around 3-5 days. Most of the children can return to their general activities within four weeks and can recover fully within six months.

Traditional Growing Rod
Traditional growth rod is a type of treatment where the metal rod connected to the spine is lengthened periodically by performing a simple procedure. Usually, it is attached at the top of the spine or attached to the spine or placed at the bottom of the spine with a rod in between. Often two rods are also placed. The difference between growth rods and spinal fusion is that rods are fixed with screws in the spine at the top and the bottom not in between, which allows the spine to grow. Mostly, there is no necessity of bracing or casting, and the patient can return to full activities within six months.

Generally, these growth rods are lengthened for every 6-9 months, depending on the child’s growth. Under general anaesthesia, a small incision is made at the site to lengthen the device. Most of the children can go home on the same day of surgery, or some children need to stay overnight depending on several health factors. Many children recover soon and can go to school within 2-3 days from the surgery.

The Titanium Rib (VEPTR)
The VEPTR device is totally different compared to the traditional growing rod. The top of the VEPTR device is attached to the ribs of the patient, and then it is connected to your spine or the hips at the bottom. The invention of the VEPTR provided treatment is effective for infants suffering from thoracic insufficiency syndrome. 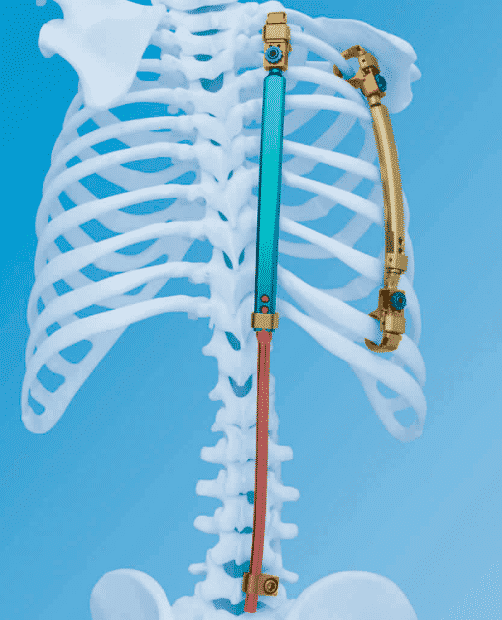 The chest doesn’t support normal breathing or growth of lungs in children with thoracic insufficiency syndrome. In such conditions, the child’s lungs may not grow and may lead to life-threatening breathing problems. The VEPTR has been designed in such a way to allow the rib cage of a child to grow while treating the deformity of the spine without spinal fusion. There is no effective treatment in the combination of chest wall deformity and scoliosis until this technique was developed.

Depending on the severity and type of deformity, one or two VEPTR devices are placed. The patient needs to be admitted before 3-5 days in the hospital for observation before the operation. Casting or bracing might not be necessary post-surgery. If the device is placed at the bottom of the spine, then kids can return to full activities, including sports after six months. The VEPTR is lengthened for every 6-9 months to keep the rib cage growing by performing surgical procedures with small incisions. The VEPTR technique provides promising results and prevents inadequate growth of the chest wall and the lung and consequent breathing problems.

The difference compared to a traditional growing rod system and VEPTR device to a magnetically controlled growing rod (MCGR) is that MCGR allows rod lengthening without a surgical incision. It might not even require general anaesthesia during the rod lengthening with external magnets. Each MCGR rod inserted into the spine contains a small magnet. A remote control device externally triggers the magnet in the rod to alter the length of the rod when the child is awake.

The initial procedure is much similar to the traditional growing rod or VEPTR. The top of the device is connected to the ribs or the spine and then at the bottom, the device attached to the spine or the hips. Your child needs to be admitted to the hospital before 3-5 days of the surgery. The majority of children can return to school or other activities within four weeks and to full activities within six months that include sports.

The lengthening of the rod is achieved in a matter of minutes. An X-Ray is done to confirm the increased length that was achieved. The lengthening of the rod is typically done every three months based on the patient’s age and curve. The invention of the MAGEC device has completely increased the effectiveness of treating progressive scoliosis in children.

Dual growing rods vs single growing rods
Growing rods are fusion-less surgeries that correct the deformity of the spine and maintain a spine balance allowing the spine to grow. Initially, a single distraction rod technique was described by Harrington, and later it was modified by Moe et al., and used in the treatment of scoliosis. Even though it has a better deformity correction rate, some complications raised debates on its benefit-risk ratio.

Later, the technique was improved by Akbarnia et al. by making some modifications to this technique and introducing dual rods to minimize the complication and to achieve solid foundations. The authors stated that the dual growing rod technique keeps the correction achieved initially at the time of surgery and also allows growth to carry on. Later some studies by experts validated the benefits of the dual rod technique with safer and more efficient outcomes.

While correcting the deformity of the spine instead of a single rod, two rods are placed on either side of the spine. In this procedure, the rods need to be anchored near foundation levels before tightening all the screws. At each foundation, two rods need to be connected. A tandem connector on either side joins the proximal and distal rods. Lengthening of rods is performed every six months—the tandem connector of the rods partially exposed by making a small midline incision. The set of screws are loosened at one end of the connectors, and the lengthening is obtained between the two rods with the help of a special distractor.

The dual growing rod technique is even more safe and effective than a single rod technique. It provides more stability; the duration of the treatment period also increased. Consistently good results have been achieved with the help of dual growth rods instead of a single one. 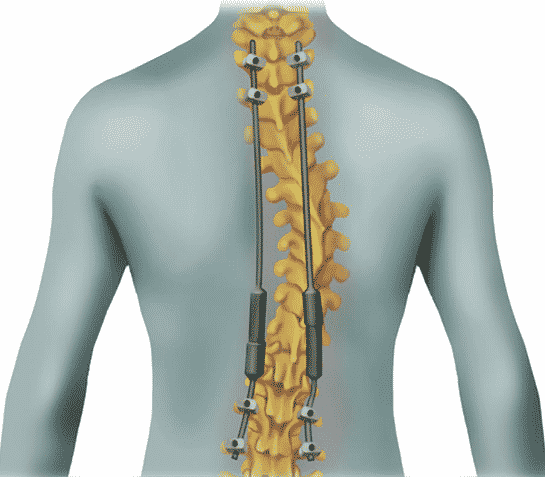 Growth Guidance In Early-onset Scoliosis
Growing rods procedures are the most commonly used form of growth guidance in children with early-onset scoliosis. Currently, two growth guidance techniques are most widely used and named as the Shilla technique and Modern Luque Trolley rods.

The Shilla Technique
The aim of the Shilla instrumentation technique, which was described by McCarthy in 2008, is to control Early-onset scoliosis by guiding growth without requiring repeated surgeries for lengthening the rods, i.e., with a single posterior procedure. The process requires assembling two 2 rods attached to 3 or 4 pedicular screws that embedded in the apical vertebrae, with fusion at the top of the curve; pedicular screws are inserted in the proximal and distal ends of the implanted rods, that enables the rods to slide, guiding the growth of the spine.

Summary Explaining The Rationale Behind All This
The main reason behind growth rods is to treat spinal deformities without affecting the growth of the spine and other parts of the body. Spinal fusion surgery is not competent for children or young people who are growing because it can destroy the respiratory functions, creates cosmetic problems, and subsequently reduces the quality of life. Growing rods are the best option so far discovered by experts in the field of orthopaedics to treat scoliosis. The technique has completely changed the treatment procedure of progressive scoliosis and increased the quality of life.

Dr Surya Prakash, the Best Spine Surgeon in Hyderabad, has more than two decades of experience in handling all types of scoliosis. Make a consultation if you have any questions or concerns regarding spinal problems.